Due to age, disrepair, and the lack of funds to mitigate the two, the old Poudre Valley Creamery building at 222 LaPorte Avenue is coming down. It was built in 1912 and was operated as a cold storage and dairy plant until 2001. That’s a pretty good run, all things considered, but I’m still sad to see it go. Growing up, I had Poudre Valley milk delivered, but my almost-native husband remembers going to the Creamery to buy dairy products…especially ice cream. (Photo circa 1969 from Fort Collins History Connection.) 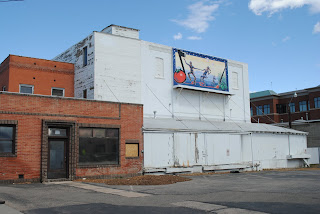 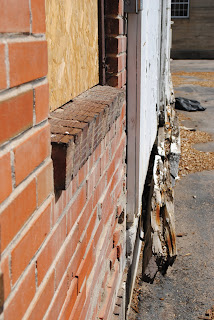 Deconstruction differs from demolition in that the building won’t just be knocked down and hauled off to the landfill. The bricks will be cleaned and stored for reuse, salvageable wood will be ground for mulch, metals will be recycled, and concrete will be crushed for use in road base. Last year, the Steele’s Market on Mountain Avenue, which had been vacant for ten years, was deconstructed. Dang, this stuff makes me feel old. 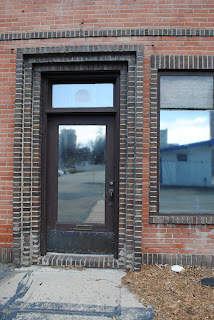 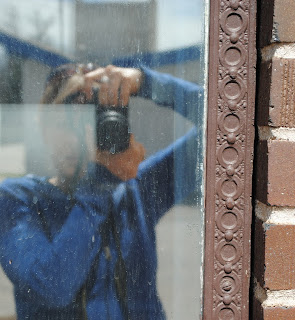 I stopped by on Friday to press my nose to the mirrored glass and get a last look. When I returned yesterday morning after dropping my ballot off at the city building, the crew had just put up the fences to keep out curious folks like me. But I’ll go by again to take some more pictures of the building coming down. 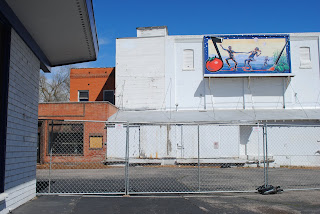 at 6:00 AM
Email ThisBlogThis!Share to TwitterShare to FacebookShare to Pinterest
Labels: A to Z Challenge, History

Hi There! Just popping in for the AZ challenge - Good to see a fellow Coloradoan!
This post makes me think of the Dairy center for the Arts in Boulder. It was very similar to this - An old dairy that had fallen out of use - In Boulder they re-purposed it and turned it into a massive arts complex with theater space, gallery space, offices, etc.
Such a wonderful way to take something old and make it new again.
I'm glad to hear that they are at least salvaging some of the brick and reusing what materials they can.
Good post - I look forward to following the rest of your A-Z!

Hi, Mickey. I wish Fort Collins could have done something similar to the Dairy Center.