“When I was a little girl, my daddy worked up at the Stout quarry. It’s flooded now, of course, since the reservoir went in, but back in those days, he left early every morning and sometimes didn’t return until I was asleep. One evening he came home and told my little brother and me that he had something exciting to show us. He had a wagon covered over with a tarp, and when he pulled back that tarp, I couldn’t believe my eyes. In the wagon was a baby mammoth the workers had dug up from an old sinkhole at the quarry. The little fella was no bigger than our farm ponies. He didn’t look too bad for all his troubles, a bit squashed, but he still had his wooly hair all over.

"Well, my mama came right out of the house and told my daddy he wasn’t keeping any such creature at our farm. After that, no one knew what to do with it. For a while, it stayed in the carriage house of the Avery House, but all the curious folks caused too much commotion. Then the men from the college took it on over there. At that time, there was a scientist visiting, I can’t recall his name but he had worked with Mr. Edison. He had the idea to run an electric current through that mammoth to see if he could get it to move. I know that sounds preposterous, but we didn’t know as much about science then as we do now. My daddy was allowed to come watch, and he brought me and my brother along. Well, when that scientist threw the switch, that mammoth gave a big jolt, and we all just about jumped out of our skins, especially my little brother. I still tease him about it to this day. Of course, the mammoth didn’t do anything else after that, and the men had to spray some water on it because the fur had caught fire. I’ll never forget that smell of burning hair. No one knows what happened to the mammoth after that day. Some folks said the Barnum circus bought it, but I think that was just a rumor.”


Mystery Photo: Last week's photo was of the old Fort Collins Municipal Railway Building at the corner of Cherry and Howes Streets. 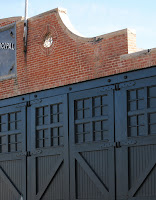 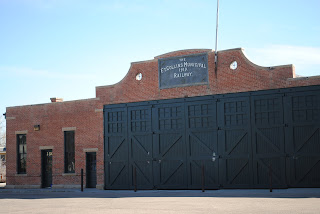 Where was this week's picture taken? 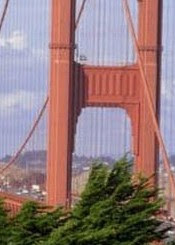 at 6:00 AM
Email ThisBlogThis!Share to TwitterShare to FacebookShare to Pinterest
Labels: A to Z Challenge

What a cool story! And, thanks for visiting my blog. I look forward to more stories and pictures. Question, Do all bridges look the same? Because that looks like the golden gate bridge but it is too sunny to be San Francisco.

Something that distinctive should be easy to recognize -- but NO. ; - ) Love the story!

Okay, as far as the picture, I'm totally taking a guess but I'm just going to say Seattle.

Hmmm...Miss Ewls' story seems a little suspicious.
; )
I do think they did find a mammoth tusk up at Horsetooth, though, back in the 1940s. Not sure if they ever tried to re-animate it.

I feel almost guilty confessing this, but Anonymous was right to be suspicious. The story was my April Fool's Day fabrication. As far as I know, no one has ever dug up a baby mammoth around here.

In keeping with the spirit of things, the picture is of the Golden Gate Bridge. Must have been a sunny day in San Fran!